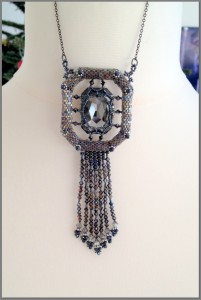 Still drooling over the wonderful octagonal crystals (incidentally which Swarovski call Large Rectangles 4627 – odd that), I saw the potential to surround one with my angular beaded tubework.

Rather than make an elaborate rope for it, I was happy with its simplicity so I opted for the chain, but then added the fringing for some lusciousness!

As a child I pored for hours over my Mother and Grandmother’s art books; I have a vivid memory of one in particular – a history of art. So it’s no wonder to me that those influences are coming out in my beadwork. I named this pendant after Heqet, the Ancient Egyptian goddess of childbirth and fertility, as it has a somewhat magical quality and evokes her spirit perfectly through its symbolism. I’ll leave it up to you how you interpret the symbolism. 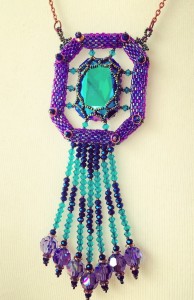 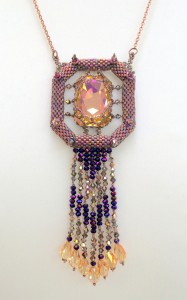