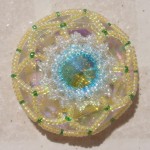 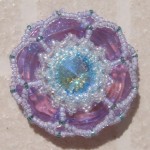 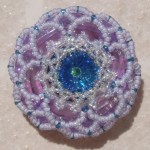 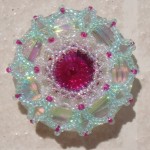 Having had a bit of a nightmare when initially trying to write instructions for Nefertiti’s Treasure, I discovered the differences between Swarovski Cosmic Rings and Chinese crystal rings. I’m talking about dimensions. My very first Nefertiti was made using a Chinese ring and I hadn’t known there were differences, but I soon learnt my lesson and had to rigorously specify exact components for that workshop. The annoying thing was that the Chinese rings were extremely beautiful and very easy to access in a number of unusual colours, but my design wasn’t adapted for them. So last summer I began playing around with a number of the Chinese crystal rings, trying to see if I could play the numbers game and achieve my goal.

I found at least 3 different sizes of hole and thickness of ring, which just meant that I used my times tables a lot! Still, I was so pleased with the end results, I made a 6th Medallion in deep cobalt blue and incorporated it into my Morgan Le Fay necklace format.