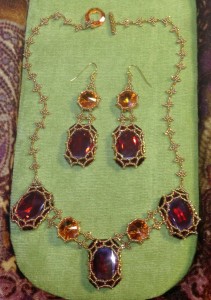 Leonora Necklace and Earrings in Red Magma and Topaz 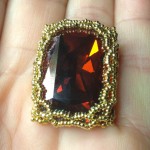 I first saw these beautiful, octagonal, Swarovski crystals when I taught at the Bead & Button Show in 2012. At the time I was working on my Isabella design and totally in love with flat back crystals, but these were cushion back, so presented a new challenge. I bought this gorgeous Crystal Magma one and started to play. The result was the version in this image, but I put it aside as something niggled me – I thought it was a bit too beady and fussy – I wanted to see more of the crystal and less of the beads, but most of all show off the octagonal shape. A year later I picked it up again and decided to try a different approach and was much happier with the result. 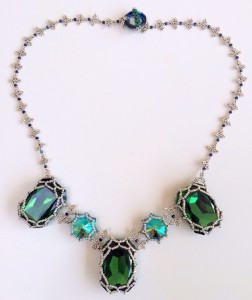 Still in Renaissance mode, once I’d sorted out how the octagons (actually called Swarovski 4627 Rectangles?!?!?) would look, I wanted to vary the size of the crystals within the necklace and brought in the rivolis. Then of course I had to decide what I wanted to do for connections, a rope structure and a clasp. This begged complete delicacy, so it wasn’t going to be a rope. I modified some connections I’d been playing with and found that they could be extended with no problem. The final piece of the puzzle was to use the dear little 14mm Cosmic Ring for the toggle ring. I can see that component being made into earrings very easily! I then went on to make a pair of Leonora earrings, but I don’t wear them at the same time as the necklace – they’re quite luscious and long! Maybe I’ll make another pair this time with either the octagonals or the rivoli but not both.