I got my inspiration for Giorgio when the Guild asked me to design a piece for our 10 year anniversary journal supplement in April, using some Miyuki beads and Swarovski crystals and based around a donut stone. I waited anxiously not knowing quite what to expect. The pack arrived and I lay everything out carefully on my workstation. I must admit feeling a little disappointed that the stone was quite drab at first glance and for some funny reason I felt guilty thinking that. But I got up to get a cuppa for inspiration, and as I moved around the table, I looked at the donut with its eccentric hole lying sideways on the mat, and suddenly it morphed into a fish desperate for his scales.

An absolute Eureka moment! Combining freeform peyote with herringbone (of course, what else) and blending size 15º and 11º seed beads produced a delicious scaly effect, finished off with delicate Swarovski crystal droplets of seawater. All that remained was to let Gorgeous Giorgio swim from a necklace of tails. Oh yes, and all appropriately made using Fireline 4lb!

I was so excited with the whole concept of working this way with a stone donut, that I immediately searched for another one to work on. I found a beautiful tear-drop shaped carnelian with a large hole, and Celestine was born. The hole was far too large to leave unadorned so I added a large rivoli as a twinkling eye for her.

Giorgio made his debut last April in the BWG journal supplement, and the fish tail necklace instructions followed in the next journal. However I have now made Gorgeous Giorgio into a workshop too.

Somehow, and I really don’t know how it happened, I seem to have amassed quite a collection of interestingly shaped stone donuts. All of them are stunning and I know that one day………… Anyway one particular stone stood out for both it’s colour and shape and I asked the question – could this be a creature? The answer was that I saw the fat little body of a bird, and I pictured it with wings along the lines of Giorgio’s tail. So I present the Bird of Joy. I think Joy is probably the wrong word and it should have been Glee, because it caused me such awful problems getting the wings to turn – and when I did achieve it, I had to repeat it on the opposite side (and guess who was so wrapped up in beading that they forgot to write down every single step). But I think I got the last laugh. I would rather like to finish her off with a beautiful navette in her body but I haven’t found one of the right dimensions. I’ll continue searching. 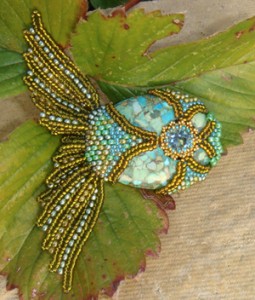 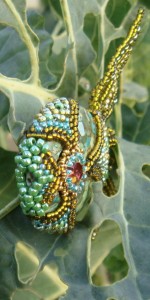 A family friend, who is an avid fisherman, saw me beading in Peyote stitch once. He was fascinated and asked me about what I was doing. I explained that Peyote stitch was a fabulously versatile stitch, which was incredibly useful for three dimensional work and could be used to shape beadwork around solid objects. He asked if I would be able to make a fish and I said it was possible. So inevitably the next question came…. “Would you make me one?” and I said I would one day. Well here, swimming through some ‘seaweed’, is Clive’s Fishy, who is actually Giorgio’s rather evolutionarily advanced cousin – he has eyes! I’d managed to go a step further as I had found some lovely little chatons that fitted the hole perfectly.